Beauty and the Beast by Richard Andre

Beauty and the Beast is among the most recognizable fairy tales in the world. Immortal story by Madame Leprince Beaumont (being a rewriting itself) went through numerous adaptations aiming at a very different audience. This post presents one of the so-called toy books, an innovation of the 19th century, where the pages could be moved and folded in different ways to present a 3D effect or change of scenes. 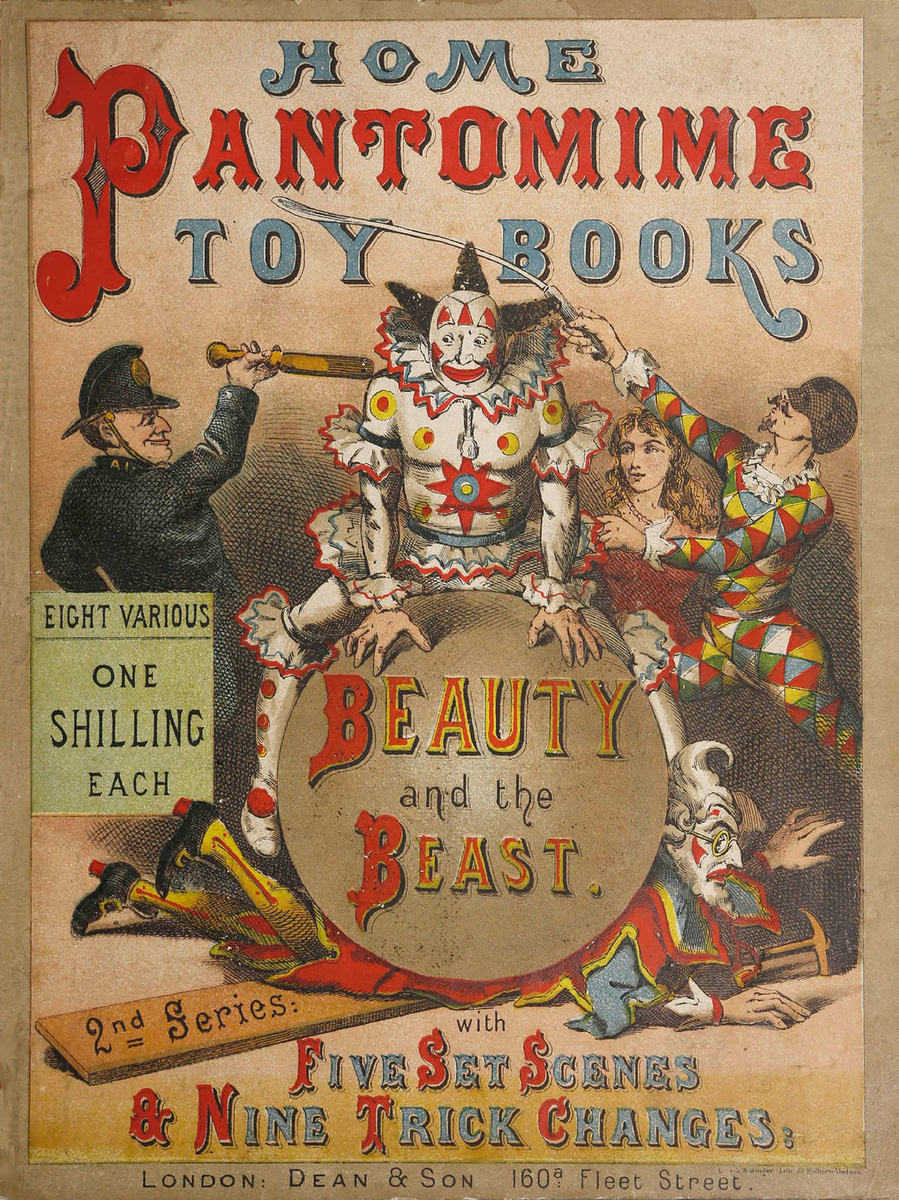 Richard Andre, one of the most prolific illustrators of his time, made a step further. The story about the pretty and kind girl who is willing to sacrifice her life for her father, and the enchanted prince who needs to find true love before he can break a spell by which he became The Beast, was adapted for the theatre.

It's a pantomime theatre, where the movement speaks instead of words but the scenery has a tremendously important role as well. We don't know for sure who contributed to the final product because credits and copyrights were not particularly taken care of in those times. Richard Andre, who changed his name two times, just to escape the sins from his past, probably didn't care much about that either.

Anyway, we are dealing with a characteristic product from the newly developed field of picture books - a pantomime toy book. The printing technique was chromolithography, done by Emrik & Binger, published by Dean & Son, London, in 1880. 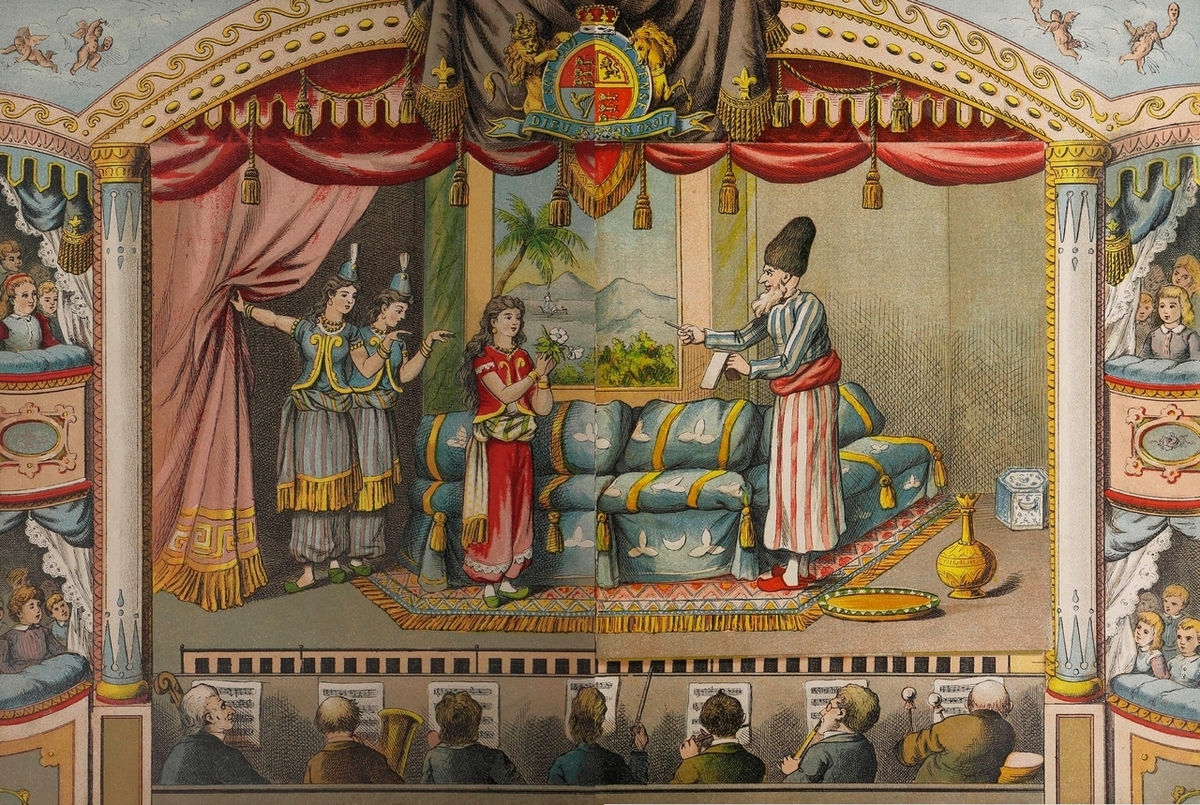 The play obviously starts with the departure of the father. While the Leprince Beaumont's story informs us about the merchant, his business, the relationships in the story, and the crisis leading to the relocation of the family from town to much smaller country house, all this information is supposed to be already known or irrelevant to the story. The setting is Oriental, which gives an additional exotic feel. 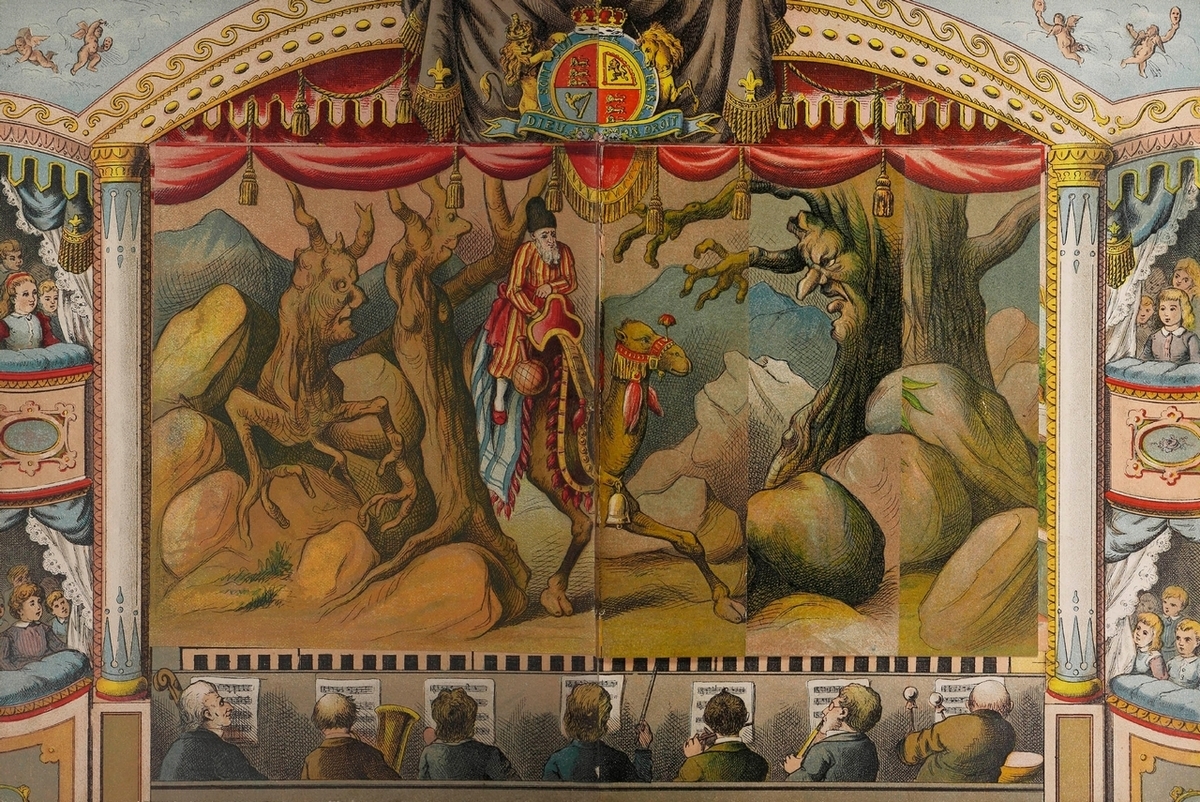 Merchant's travel is not a nice one. He looks worried, the trees are threatening. Everything can happen. 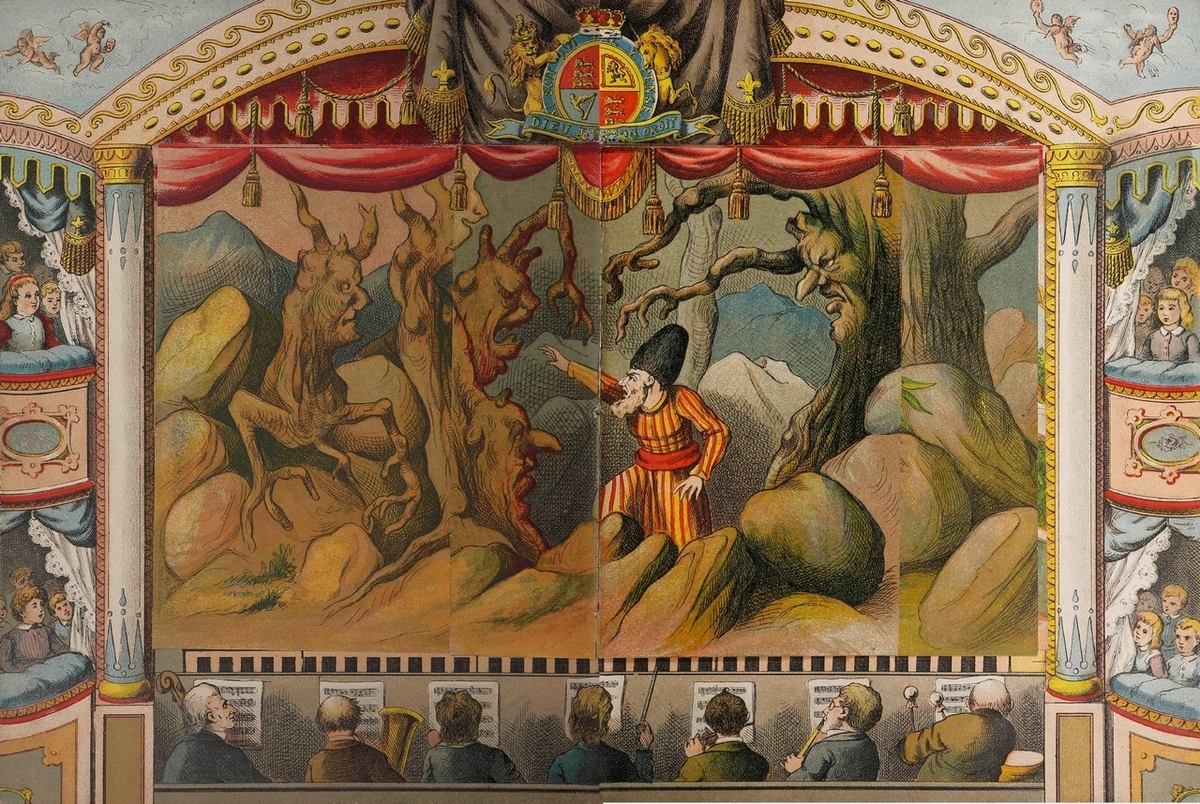 We don't know what happened to the camel but the merchant is not ready to give up yet. It looks he'll continue on his foot. 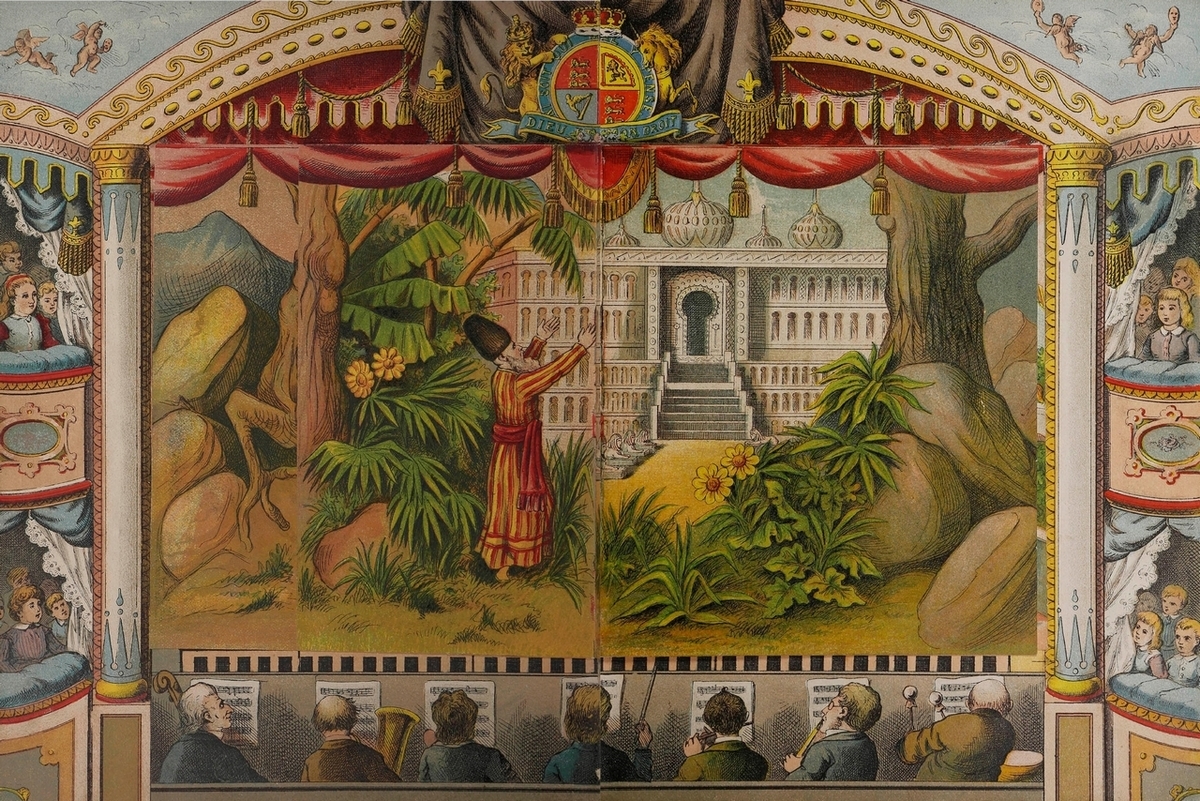 And there it is - a magnificent palace, looking like a perfect shelter to the man who was so troubled. Things look much more optimistic now. Now threatening trees around! 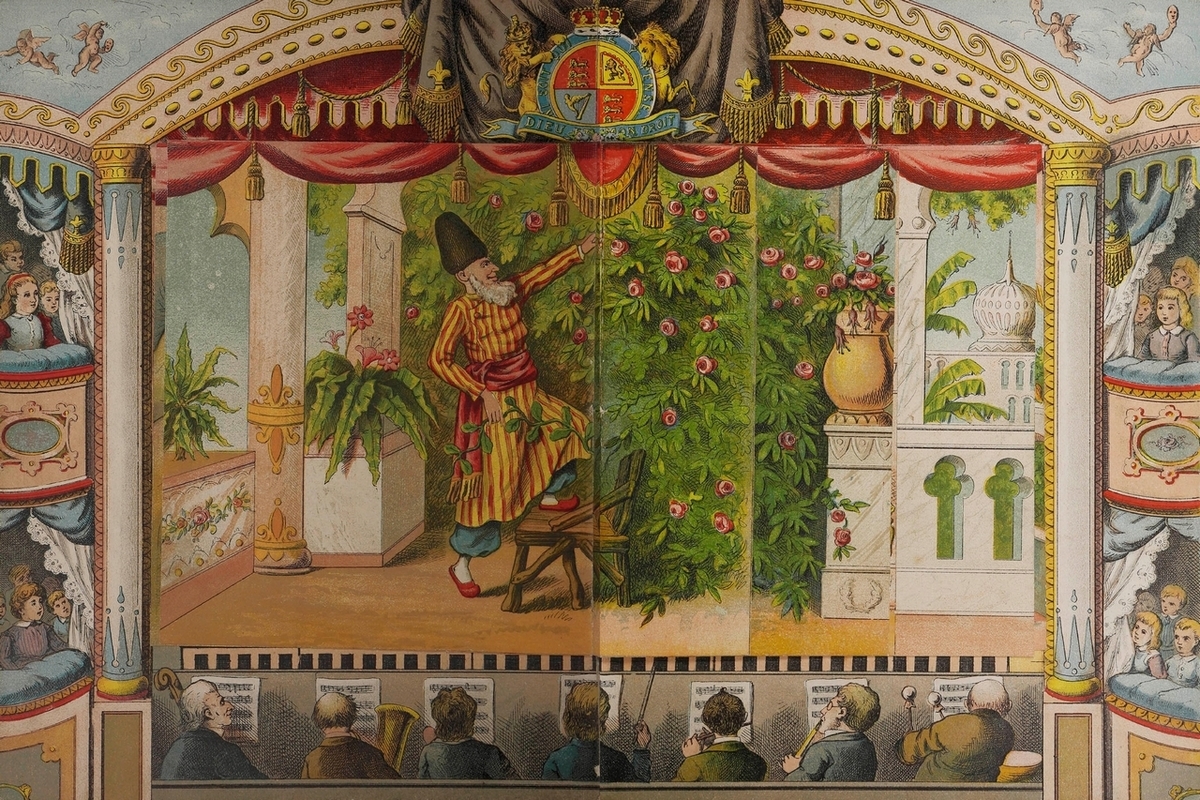 Merchant's luck is coming back - he found a rose, a flower he promised to his youngest daughter. Yes, Beauty will be very happy when she receives it. 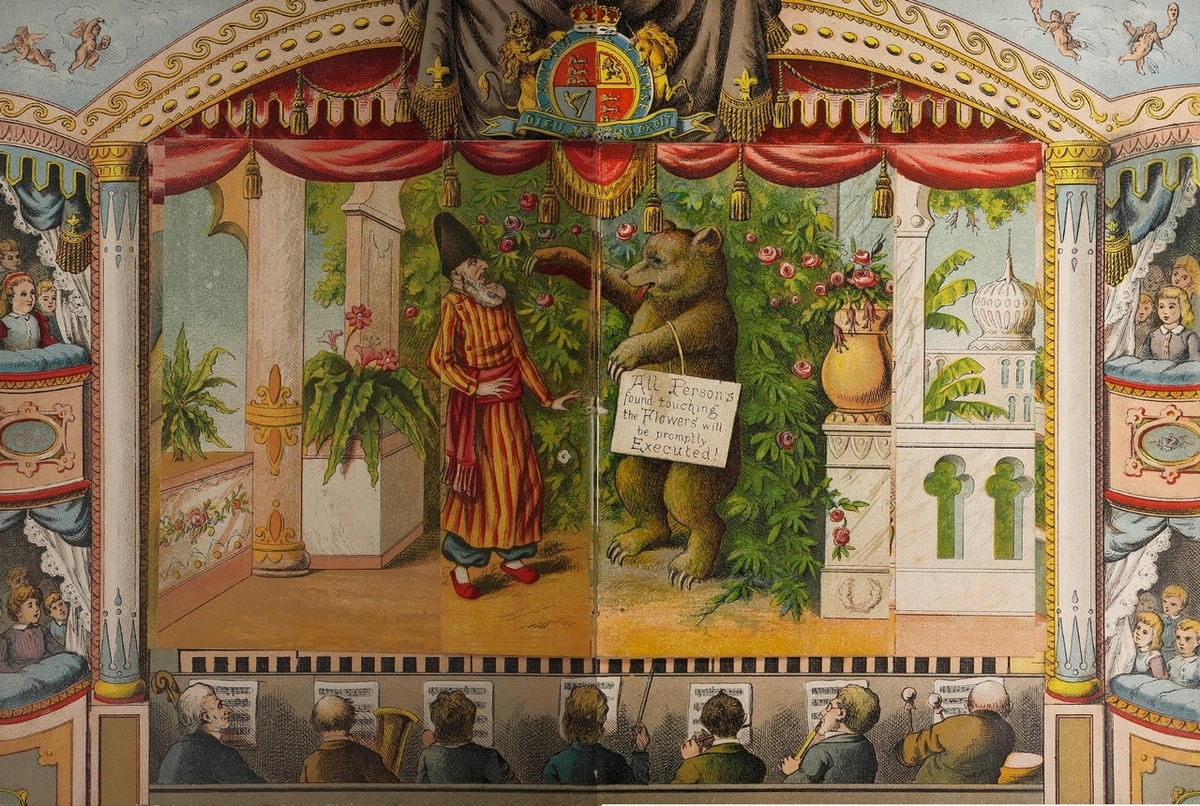 But that was a mistake. A fatal mistake. Roses are not meant to be picked. They are beautiful just like they are - alive, on the bush, with other roses. The Beast demands punishment. Will the merchant pay with his life? Or can he offer something better? 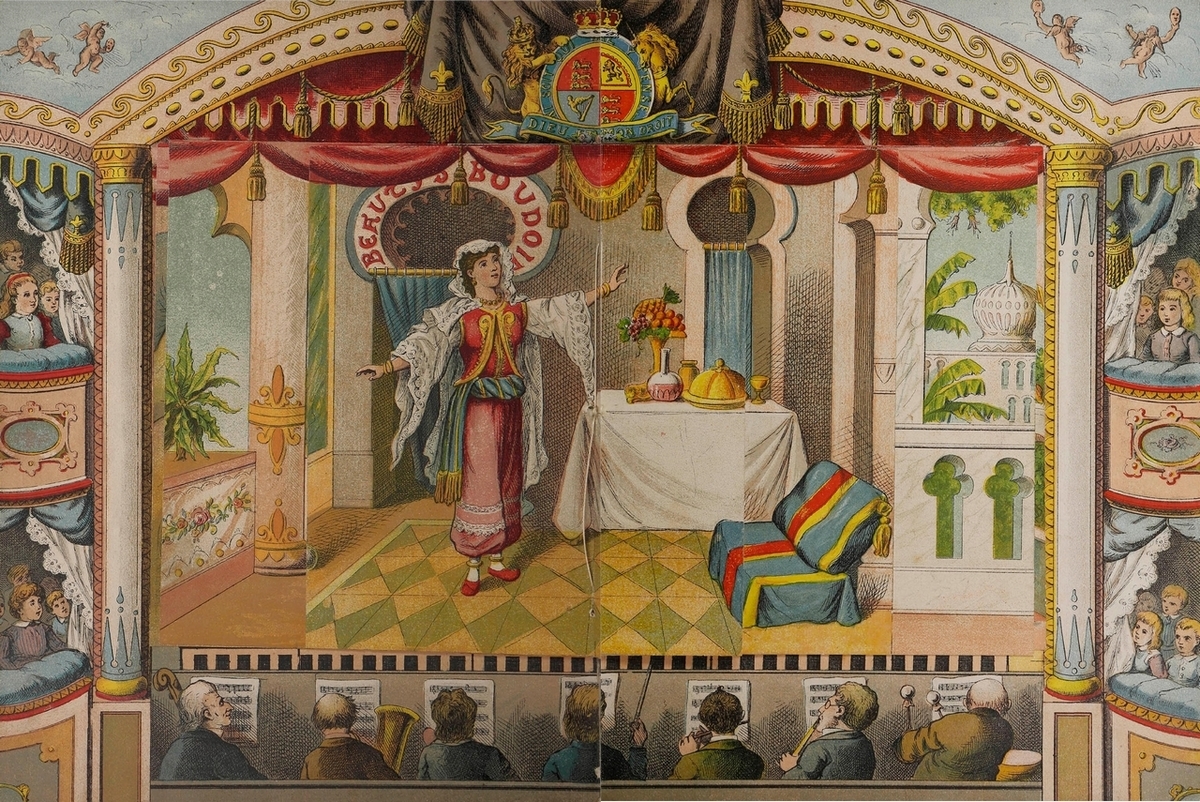 Beauty feels guilty. Her wish for the rose led her father into trouble. She is willing to replace him in front of the Beast. She demands that. 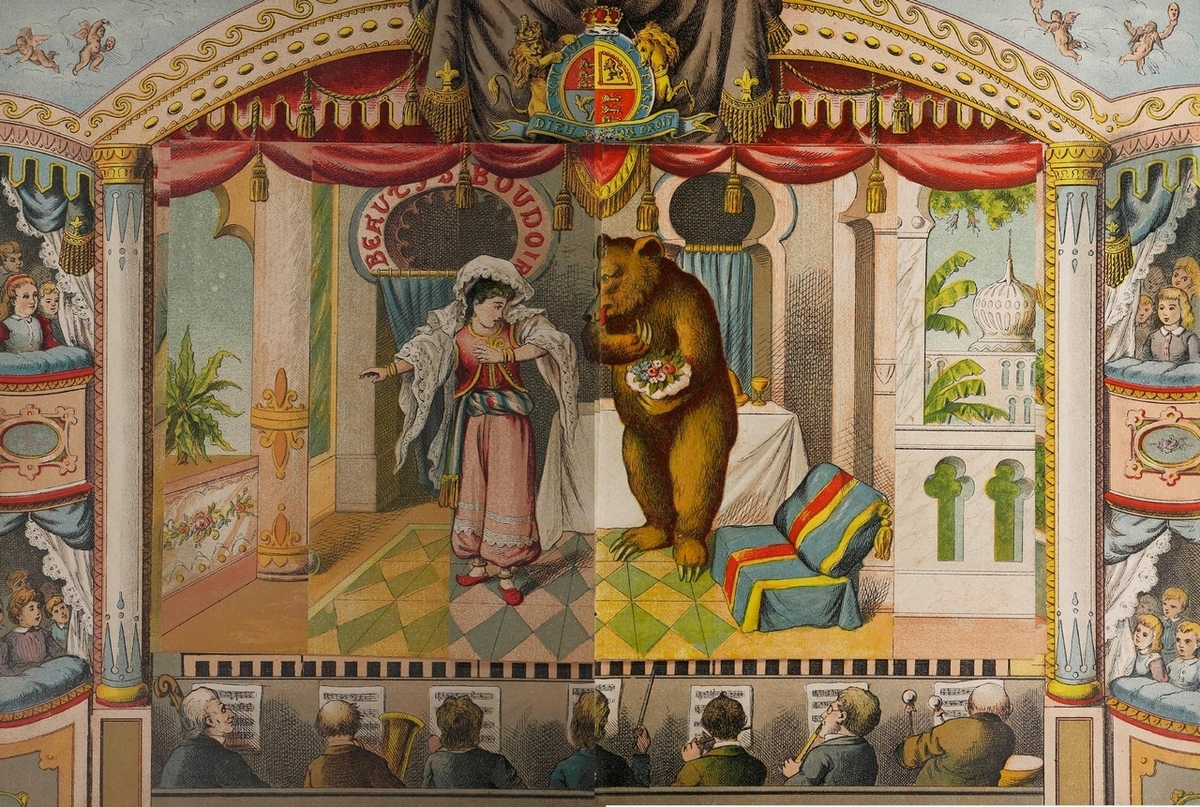 The first meeting between Beauty and the Beast is surprisingly nice. The Beast doesn't intend to eat her or tear her apart. At least for now. He even brings her flowers. They soon befriend each other. 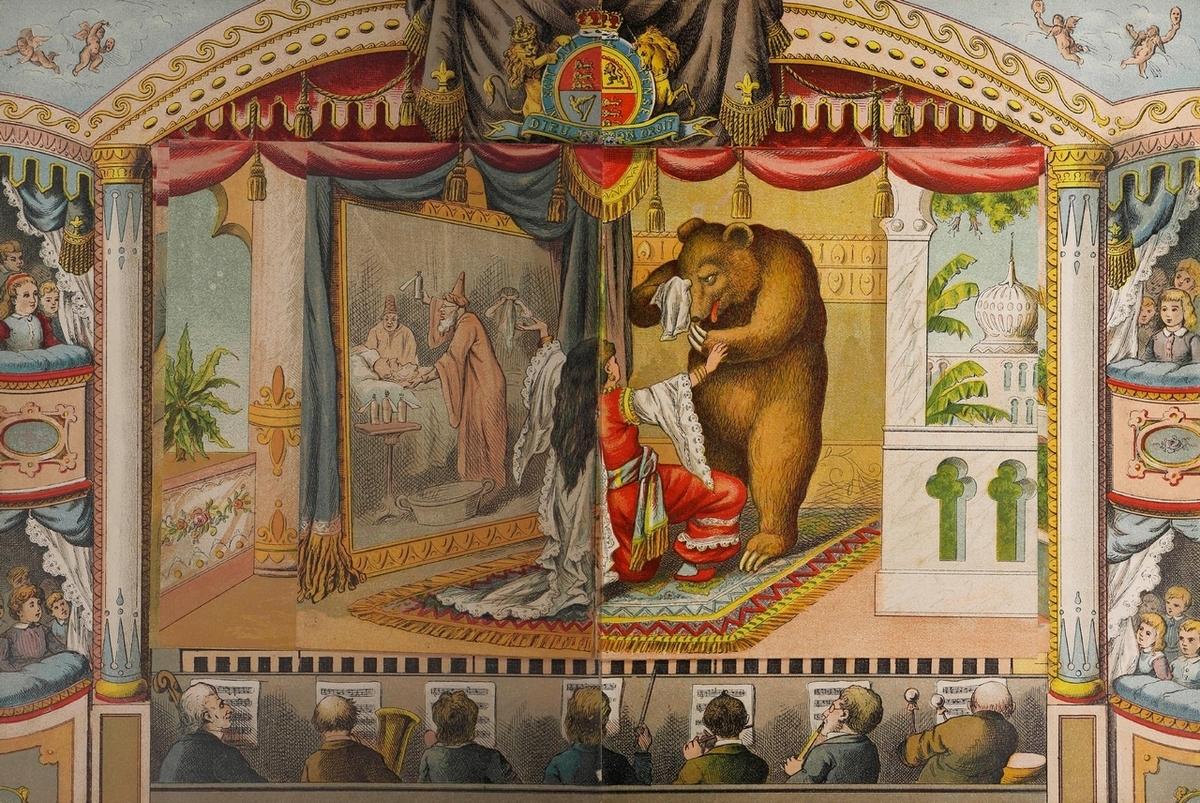 But Beauty's life in the palace has its downsides. She misses her father. A magic mirror shows her his image which worries her even more. Merchant is ill. Very ill. Beauty wants to see him. The Beast gives her permission to visit her family but she must return soon. Otherwise, he will become ill. 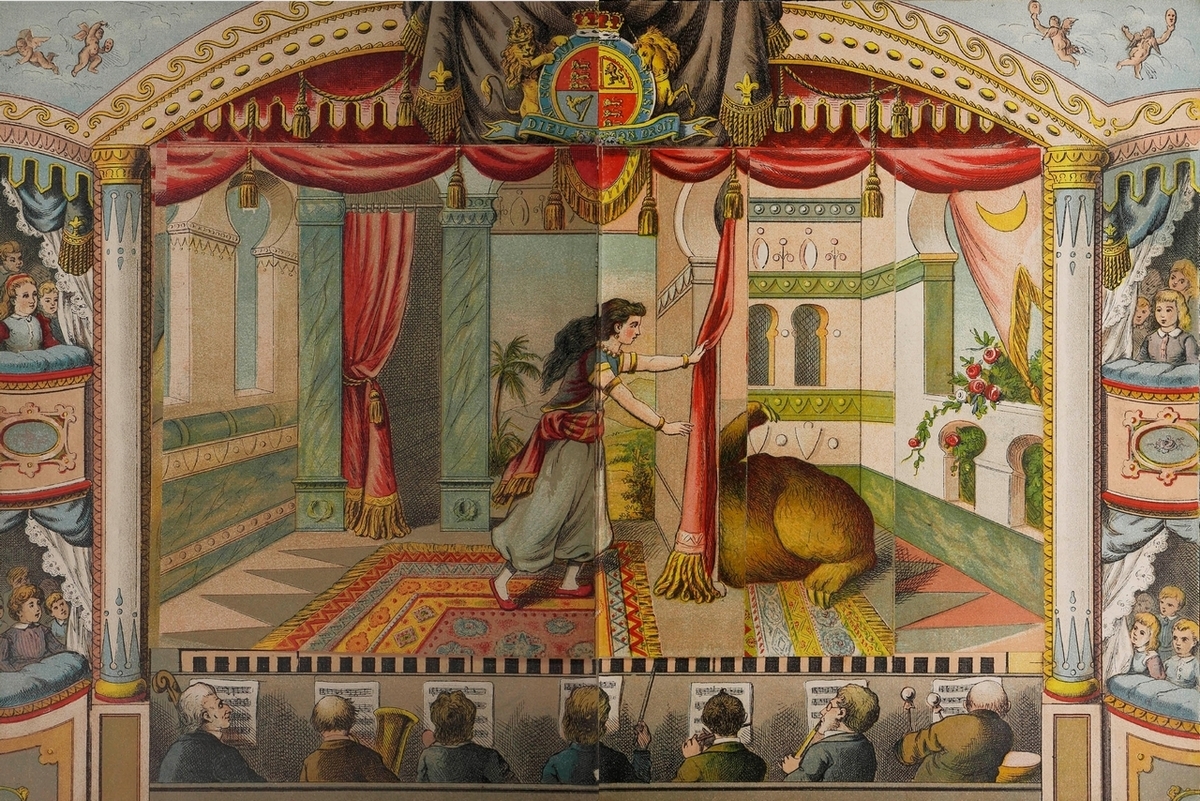 Beauty kept her word and returned to the palace. Just about time to find the Beast on the floor. Her father is better but her friend is in trouble now. Will he die? She realizes how important it became the Beast to her. She wants to stay with him forever. She would like to marry him. 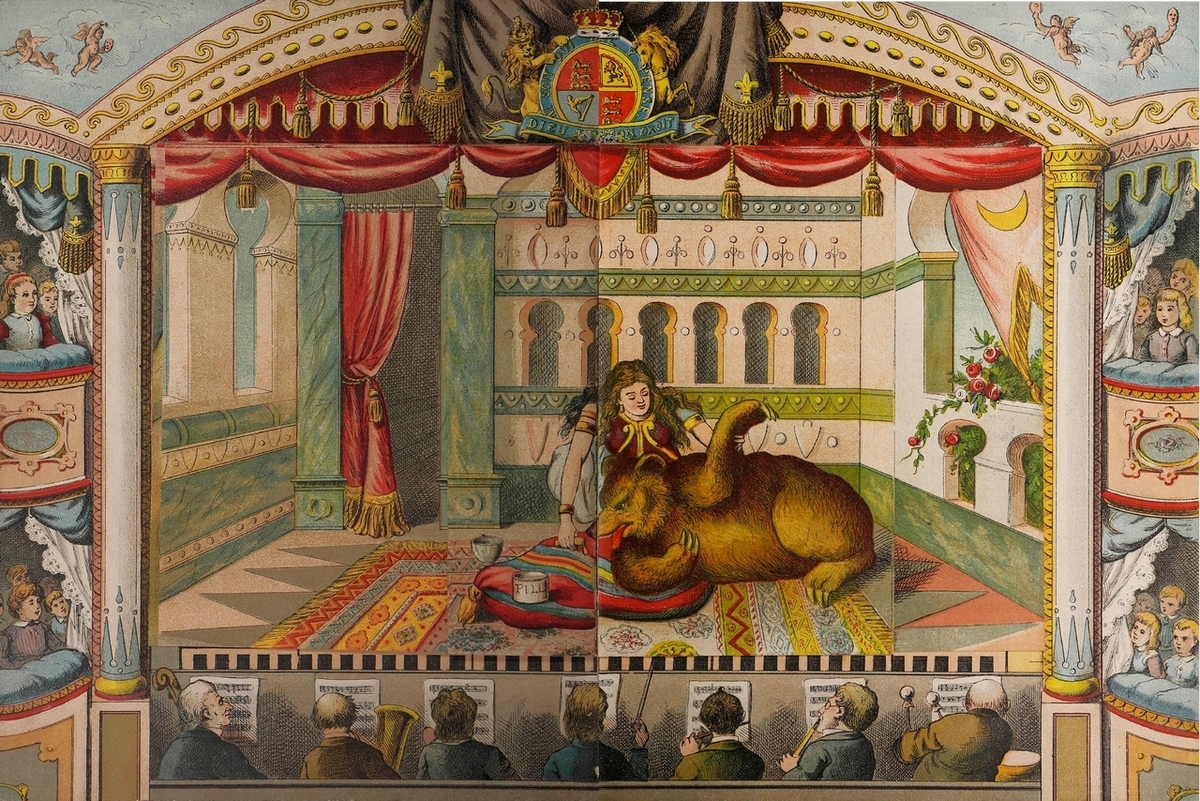 The Beast heard the good news. His health is restoring. The presence of Beauty is the best medicine for him. Soon he transforms into a handsome prince. He was enchanted and only true love could save him. 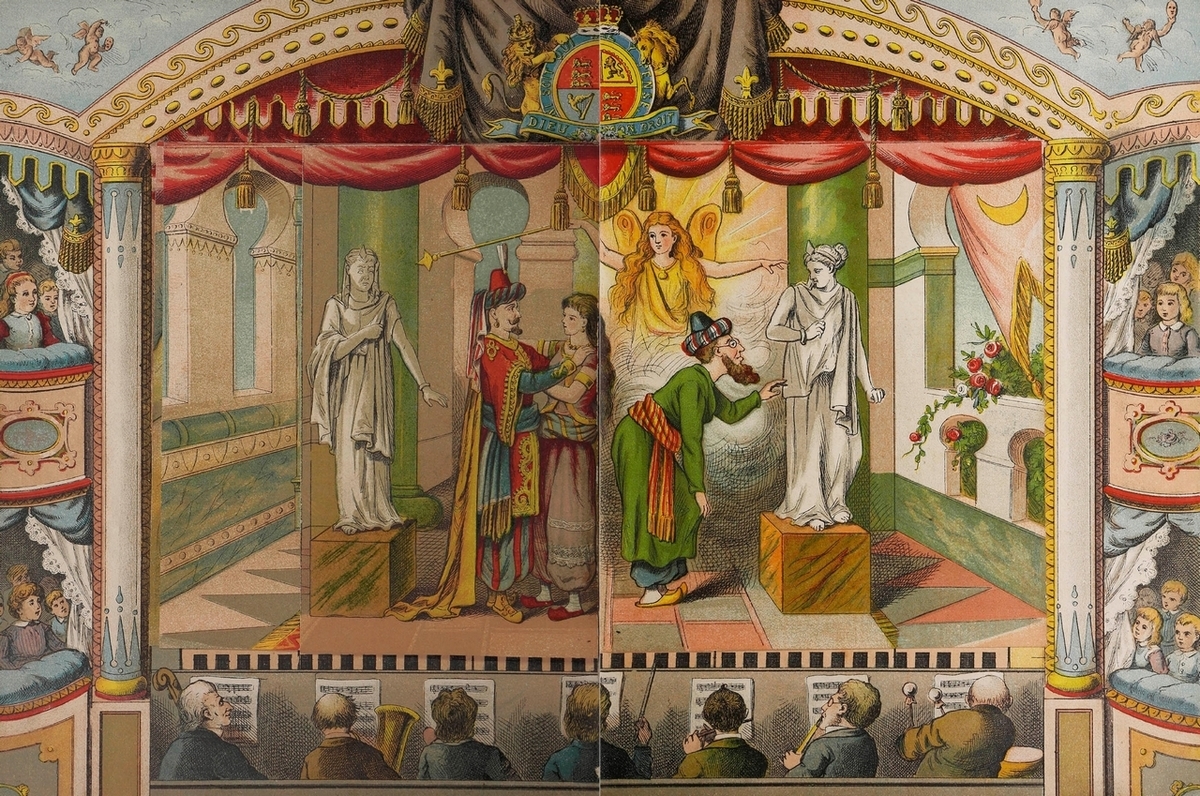 A marriage between Beauty and the Beast follows. Her jealous sisters are there too. But they are transformed into the statues. This way they can't hut the happy couple anymore. Magic works in their favor now. Her father moved into the palace as well. 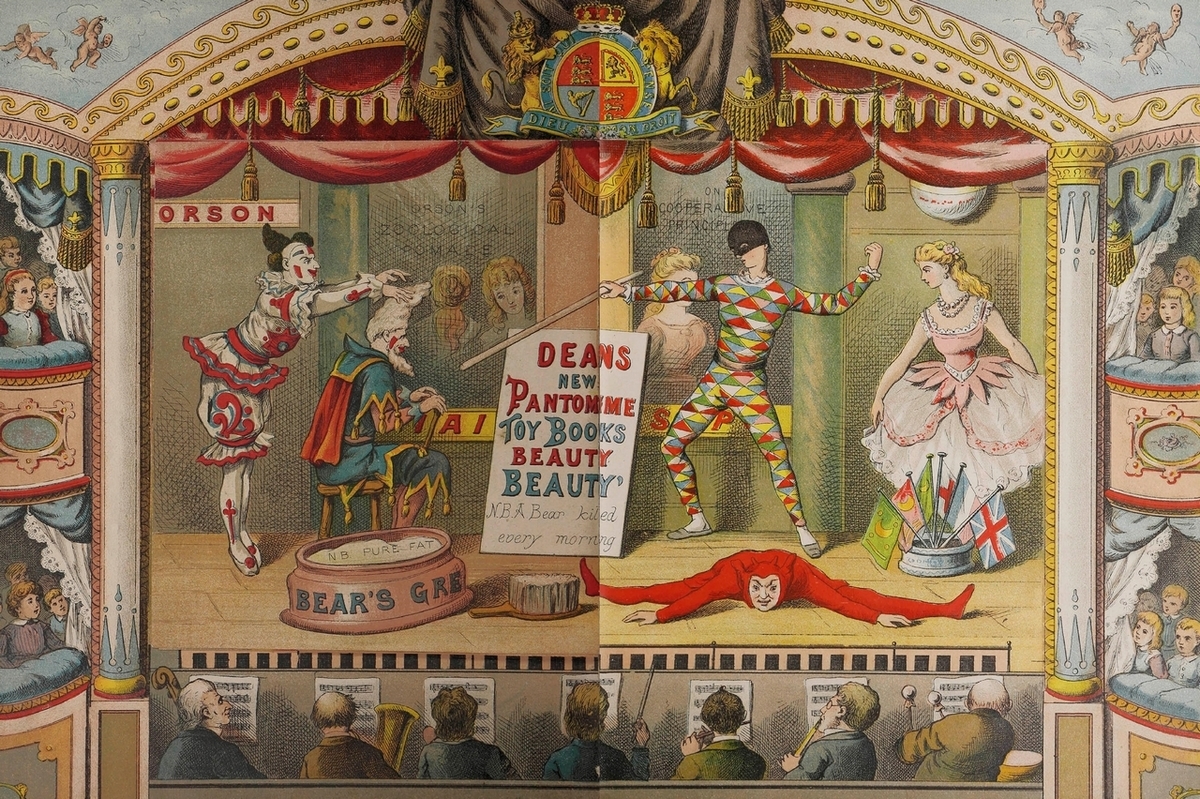 This book is just one of the series. If I find another one, I'll add it to this blog. In the meantime, you can check an interesting article about the mythology behind the fairy tale about Beauty and the Beast!

Calendar for 1896 by Eugene Grasset »
Profile